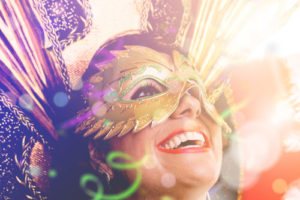 Carnival season is perhaps one of the most exciting times to be on the island. Carnival is the one time a year where locals on the island can display their rich culture to the world in the grandest display.  Aside from its Caribbean neighbor to the south, the islands of Trinidad and Tobago,  the St Lucian Carnival is widely known as one of the Caribbean’s most popular festivals. Carnival is the time for as the locals say to “get on bad” meaning to party and have a great time.

The carnival season in St Lucia use to be held in February after lent, however in order to not be overshadowed by the Trinidad and Tobago Carnival, they moved their date to July 17th. Carnival has its roots traditionally in ancient Greek festivals, parades in Imperial Rome, and also religious processions in Europe. Within St Lucia and the West Indies, carnival also has its roots in West African traditions.

The first Carnival was organized in St Lucia after World War 2. It was in 1947 that a small group of young people came together dressed in ragged clothing, beating bottles, pieces of steel and whatever else they could find to make beats as they danced through the streets of Castries.

The St Lucian Carnival of today is a far cry from what it use to be, however, the spirit remains the same. It is a known fact that people spend all year preparing for the festival, by making their own costume or saving their wages to buy the most extravagant carnival costume to stand out in the parade.

J’ouvert is the first party that signals the start of Carnival at dawn. Locals assemble at hotspots across the island partying at all hours of the night throwing mud, powder, water or foam on each other as they dance and fete (party) until dawn. If you plan to attend J’ouvert, do not wear your best clothing; prepare to get dirty.

Music is the heart and soul carnival.  Artist all across the Caribbean make music specifically for the carnival season. While reggae is the most popular genre of music to come from the Caribbean, during carnival, calypso, and soca music rein supreme.  Artist from each island produce and perform the hottest tracks within their island and across the region, and St Lucia is no exception.

If you plan to march with a band in Carnival, then you are playing “mas”. When you play mas, you will be dancing through the streets of St Lucia to the sounds of steel pans or a soca band.

During the carnival season, a band is not what you might think of as just a group of singers; in Carnival, it is so much more. A band during the carnival season can involve either a DJ or a soca artist who performs on a moving truck. These trucks are then surrounded by hundreds of people dressed in bright colorful costumes unique only to that band. As the truck moves, so do the people as they drink and dance the day away. Joining a band is a great way for locals and foreigners to enjoy the full carnival experience.

At the end of the parade, all bands usually assemble at the local stadium or park to be judged based on their costume designs, music, and energy among other factors. The is also a competition held to nominate the soca artist of the year on the island as well.

During the St Lucia Carnival season, there are many cultural events all across the island. Dave’s Taxi service can provide you with the transportation you need to make all carnival events leading up to the big day. Our professionals also have insight on all of the popular events on the island and can provide a list of the best parties and soca concerts. Before your next cruise or flight to St Lucia contact Dave Charles Taxi service today.